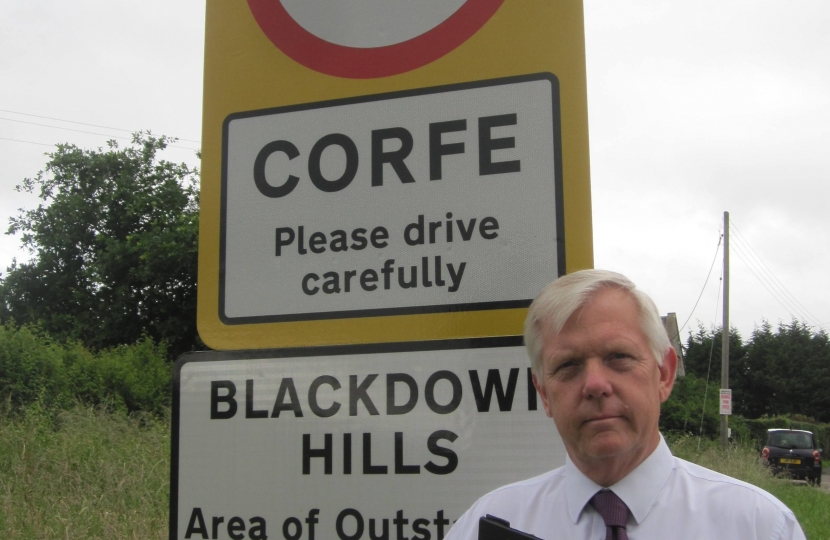 After nearly 50 years of campaigning the small village of Corfe, outside of Taunton recently saw the speed limit through the village reduced to 30 mph. Paperwork held by the Parish Council shows that as long ago as the early sixties the villagers were arguing for a reduction.

County Councillor David Fothergill arranged for additional speed measurements ahead of a public meeting with County Highways. David comments on the meeting 'There was a lot of frustration in the local community built up after years of arguing their case but the new speed readings really changed things. The Police eventually supported the move and County Highways agreed to develop plans to implement the new speed limit'

The residents of the village however faced their next hurdle in raising several thousand of pounds to help fund the changes. Very quickly the fundraising machinery in this small, rural Parish went into gear and within a few months the money was found and the speed changes implemented.

"I was absolutely delighted for the local community, this was something which they had argued after for years.... in fact decades!' comments David ' I was pleased to be able to play a part in bringing this change about  and improving the quality of life for all in the village.

"So what lessons could be learnt for other communities? Have clear community, parish council and county councillor support; realistic aims and some degree of patience! It certainly paid off for Corfe."